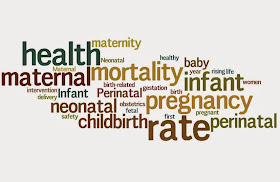 Let's clear up a little confusion. Are the infant mortality and maternal mortality rates in the USA reasons for women to be afraid to give birth in a hospital here?


Infant mortality is not the correct mortality rate to use to gauge safety of obstetrics / maternity care.

The USA unfortunately does rank poorly for infant mortality. Why is that? You might be surprised to hear that it is not due to obstetrics. It is mainly due to two factors:

1. We include micro preemies in our infant morality rate while other countries would consider them to be miscarriages or stillbirths. In other words, it's not a matter of more babies dying in the USA, it's a matter of us recording deaths that other countries would not. (this also affects our neonatal mortality rate... read more about that in the article below). Infant deaths within the first month of life are less frequent in the USA than they are in Finland, which has the lowest infant mortality rate in the world.

2. Socio-economic issues is unfortunately the other issue, families lacking means to have what they need to safely raise a baby in their home (for example, not being able to afford to take their child to the doctor or hospital if the child is sick). Unfortunately, there are a lot of deaths happen after the first month of life but before the first birthday.

You can read this short but informative article that expands on these issues here, the studies are included within this piece: new infant mortality studies


Maternal mortality - why does the USA have a rising maternal mortality rate? Unfortunately, the real issue in our country is health of pregnant women. Maternal death is very rare (which is why it's measured per 100,000). And it's even more rare for healthy, low risk women.

Our number one pregnancy-related killer for women in the USA is cardiovascular disease.

Some important information to read/consider:

"In the U.S., deaths from hemorrhage, sepsis (infection) and abortion (the medical definition of which includes ectopic pregnancy, miscarriage and induced abortion) are on the decline.... But deaths from medical complications that were either exacerbated by pregnancy or started during pregnancy -- things like congenital heart disease, diabetes, obesity and kidney problems, are on the rise." (my emphasis; quote from Maternal Mortality Article << this link includes a recent study on maternal mortality around the globe)

In other words, mass majority of the women dying due to pregnancy-related issues in the USA have chronic health issues and need more intervention, not less.

That should clear up the confusion. Don't let someone scare you away from a hospital birth with infant and maternal mortality rates. Now you have the information you need to know that our hospitals in the USA do quite a good job of keeping our babies and mothers safe during childbirth.