Let's discuss HBAC a little more. Again, for those not familiar with the acronyms:

April 4, 2017 Update: a new study from the Midwives Alliance of North America (MANA) confirms that attempting a VBAC at home comes with a much higher risk of neonatal death. The study Perspectives on risk: Assessment of risk profiles and outcomes among women planning community birth in the United States looked at planned, midwife-attended births in a home or freestanding birth center. (Note: in the study, they use the term LAC (Labor after Cesarean) instead of using the term TOLAC or attempted VBAC.)
Here are the neonatal mortality rates for women attempting birth at home or freestanding birth center:
Women with prior vaginal birth, no cesarean history: 1.03/1000
Women attempting VBAC with prior vaginal birth: 1.27/1000
Women attempting VBAC without prior vaginal birth: 10.2/1000

Yes, you read that outrageously awful rate correctly: 10 neonatal deaths per one thousand! Once again, all of these rates are far too high, but especially for women attempting a VBAC who have never had a vaginal birth.

The neonatal mortality rate for women attempting a VBAC with a midwife at home or in a freestanding birth center is an alarming, tragically high rate. Far too many babies dying preventable deaths.

* The hospital attempted VBAC group includes a higher risk group of women. It includes women with and without prior vaginal birth, with and without higher risk medical conditions and also includes fetal deaths - death of baby in uterus prior to onset of labor from 28 weeks gestation and beyond. Fetal deaths and higher risk pregnancies were not included in the home and birth center rates above (meaning, the mortality rates would be even higher for the home and birth center births if they were included).

Perhaps you are wondering if 1052 HBACs in the MANA study is a large enough sample to draw any conclusions?


In short, the answer is yes. In long, keep reading.


I posed a question regarding this matter to a few experts: 2 doctors and 1 statistics professor. Is it possible that the increase risk of HBAC is due to chance? They each agreed that the increased risk is far too high to be due to chance, even considering the sample size of 1052. Statistical power comes into play here, which is affected by various factors - an important factor being the magnitude of the effect. Since the effect in this case is large, a sample size of 1052 births is adequate.

Here's what the statistics professor had to say about it: "Short answer: The [MANA HBAC] data set as a whole is not too small. The breech and VBAC groups are not too small. The preE and gestational diabetes groups are. The 1052 HBACs are too small a number to be totally sure what the risk of HBAC at home birth is, but it is NOT too small to be sure that it is much worse than hospital VBAC. It's kind of like, "I don't know exactly what breed that dog is, but it isn't a cat." Specifically, we can be 95% sure that the true probability of baby death from HBAC is AT LEAST 0.0025, that is, 2.5 deaths per thousand attempted HBACs with full-term babies."

And the response from one of the MDs: "It would be reasonable to argue the sample size is too small if one were arguing that you cannot draw any conclusions if, say, we were comparing a hospital death rate of 4/1000 and a homebirth death rate of 5/1000. The small homebirth sample size might mean that relatively small increased risk in the homebirth group was due to chance and that if we looked at 2000 HBACs, the death rate might be only 4/1000. But it is another thing entirely when the death rate in the HBAC group is astronomical. When the increase risk is dramatically higher, it is statistically unlikely to be due to chance."

Another way to address this issue of sample size is to repeat the same study and see if the results are similar. And we can already do that. This is the second study done in the USA that addresses out-of-hospital attempted VBACs. The first was published in 2004 by the American College of Obstetrics and Gynecologists by Lieberman, et al. 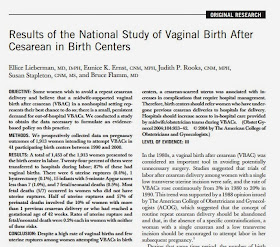 In the Lieberman study, there were 1453 labors/births. Let's compare the mortality rates to the MANA study:

This increase risk (again, compared to the mortality rate of 1.3/1000 for hospital attempted VBACs) is not due to chance.

HBAC... are there other risks?

In my first post regarding this issue, I said "Coincidentally, the MANA study infant mortality rate for HBAC mothers is consistent with the risk of uterine rupture (5 babies out of 1052 died in the MANA study; risk of uterine rupture is 5 per 1000). It is possible that all 5 deaths were due, directly or indirectly, to uterine rupture." So is it possible that all 5 deaths out of the 1052 attempted VBACs were due to complications from uterine rupture? Yes, it is. But we don't know. Because the MANA study authors neglected to provide information about the deaths. So let's look at other reasons why attempting a VBAC in an out-of-hospital setting is riskier. What risks are to be considered for a woman choosing HBAC ?


1. Risks of birth. Period. For any woman, giving birth in any setting, regardless of mode of delivery, regardless of birth attendant, regardless of intervention, there are risks inherently involved with childbirth. Shoulder dystocia, cord prolapse, fetal/neonatal hypoxia, placental abruption, congenital anomalies that require immediate access life saving equipment, etc. Birth is not without risk, no matter where birth takes place. There will be a certain amount of deaths that occur in all birth settings.

2. Risks of home birth in the USA. Home birth here in the States in and of itself is far riskier than hospital birth. Not a single study done on home birth here in the States supports home birth as an equally safe option to hospital birth -- not even the MANA study, not even for low risk women. There is also the 2015 New England Journal of Medicine study, 2014 Cornell study, the 2013 Grunebaum study, the 2013 Cheng study and the CPM2000 study. Each of the studies addresses planned, midwife-attended home births. Each show a dramatic increase risk for home birth. Home birth in the USA is not like home birth in any other first world country. Different system, different midwives.

4. Risks of uterine rupture. We don't know the mortality rate specifically for uterine ruptures that occur in an out-of-hospital setting, but we do know that the baby needs to be delivered within 10-37 minutes. Information currently available regarding mortality rate for uterine rupture for attempted VBACs is for in hospital attempted VBACs. If you've ever been a part of a home birth transfer to a hospital (I have), you know that getting a laboring woman in a car (or ambulance), transferred, assessed at the hospital, prepped, and into an operating room takes a pretty good chunk of time.

5. Lack of Monitoring. Using a handheld Doppler monitor or a fetoscope is not the same as using Continuous Electronic Fetal Monitoring (CEFM). For women attempting a VBAC, CEFM is recommended by the ACOG (American College of Obstetricians and Gynecologists), American Academy of Family Physicians, RCOG (Royal College of Obstetricians and Gynaecologists), and SOGC (Society of Obstetricians and Gynaecologists of Canada). Maternal pain, bleeding, and other signs/symptoms are not as common as fetal heart rate abnormality when uterine rupture occurs. According to the latest research provided in the Guise study and from the VBAC bulletin of ACOG, fetal heart tracing abnormalities is the most common reported sign of uterine rupture.


Bottom Line: Attempting a VBAC outside of a hospital is risky business. If someone is telling you otherwise, it's because they either don't know about the increased risk or because they don't want you to know about the increased risk. 3-4 babies per 1000 dying preventable deaths is far too high. And for a woman attempting a home VBAC who has never had a vaginal birth before? At best, her baby has an increase risk of dying that is 8 times higher than attempting a hospital VBAC.