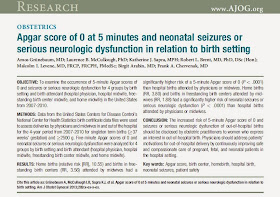 Link for above AJOG study

Edit 01/31/2013: I need to add the latest study offering up insight on home birth safety here in the USA. Click here to read it. It, yet again, shows increase risk for babies born at home.

I originally wrote this as a post in a forum online but I decided I wanted to share it here as well. This post addresses the peer reviewed studies regarding safety of home birth in our country.

It is important to know that studies done in other countries to "prove" the safety of home birth do not apply to home birth midwifery in the United States. Countries like the Netherlands, the UK, Canada, etc have home birth midwifery integrated into their health care systems. Their midwives have different education and training... more similar to a CNM or CM here in the USA. CPMs and LMs are a different story though, but they are the ones who attend majority of home births in the USA. CPMs and LMs do not have hospital privileges. They are not comparable to midwives in other first world countries in terms of education and training, as most CPMs and LMs go through a direct-entry process that has no education requirements (until September 2012 it did not even require a high school diploma). There are other differences as well that I have discussed in other blog posts (here and here).

For various other reasons, home birth in the United States cannot be compared to home birth midwifery in other first world countries. It's comparing apples to oranges.

Is home birth safe here in the USA? What we have for information to answer that question are 4 peer reviewed studies plus the CDC Wonder Database, all of which show an increase risk for babies born at home. Here are the 4 studies:

This study is the most well-known study in the home birth community and the only study that supposedly shows the proof that "home birth is just as safe as hospital birth." But this study has two fatal flaws and it actually shows the opposite, that home birth increases the risk for babies.

First, the authors compared intervention rates between home and hospital for the same year, 2000. But when they compared mortality rates between home and hospital, they used the year 2000 for the home birth rates BUT for hospital rates, they used several papers dating back to 1969. Why didn't they compare hospital rates for the same year? Because if they would have, you find the rate to be double to triple the risk. The authors claimed that they did not have the hospital data available for the year 2000 when they published their study, which is why they used the dated papers. You can read a critique here which shows the numbers:

Science Based Medicine: A Critique of the Leading Study of American Homebirth

It is also important to note that crucial data is missing from this study. In Autumn of 1999, NARM contacted all registered CPMs regarding this study. Not everyone could be contacted, not everyone planned to re-certify, not everyone agreed to participate. So they were left with 409 midwives. All 409 midwives AGREED to take part in this study. Yet, 18 midwives ended up not having their births used in the study - those 18 midwives were not able to re-certify because participation was mandatory in order to do so.... however, this does NOT mean those midwives are not still practicing. Where is the data on those 18 midwives and their births? Why did they AGREE initially to take part? What if they each had an infant or mother die under their care and that's why they did not complete the process? This essentially means midwives who had bad outcomes could bow out after the fact and those outcomes would then not be included in the study.

These are two serious flaws. This is a study I once was totally behind.... this is what I had my husband (and others) read when we were planning for our home birth, this was my "proof" of home birth safety. I was completely unaware of these flaws at that time. I even wrote a response on the article in the British Medical Journal regarding the missing data on those 18 midwives but I have yet to hear a response.

This study shows a triple neonatal mortality rate for babies born at home vs in a hospital but it isn't a high quality study because there are births included in the home birth group that did not have a midwife present (in other words, births that were intended to be hospital births that were accidental home births).

These last two are the most recent studies:

#3 -- Apgar score of 0 at 5 minutes and neonatal seizures or serious neurologic dysfunction in relation to birth setting by Grunebaum, 2013, AJOG

Hospital births with CNMs had the lowest rates (meaning, best outcomes -- which would make sense b/c it would be low risk women). Followed by hospital birth with a doctor. A fairly significant higher risk is midwife-attended birth center birth. The highest risk - by an incredibly significant amount - was home birth with a midwife.

Some home birth advocates are trying to say these studies are not valid because they use unplanned home births - this is NOT true. They used data ONLY from home and birth center births where a midwife was present. If it was not midwife-attended or if it was unknown whether or not there was an attendant, the data was not used.

One of the limitations in the studies is actually home birth transfers to hospitals that resulted in death... those would be counted in the hospital group. This would obviously make the neonatal mortality rate even higher for home births if those deaths were counted in the home birth group.

Here is the response from MANA regarding these two studies:

This response from MANA could not provide a better example of why I have ZERO respect for that organization. It is full of lies and utter nonsense.

First, they try to dismiss the findings by saying birth certificates "are not very accurate when it comes to rare outcomes like very low Apgar scores, seizures, or deaths (Northam & Knapp, 2006)."

Next, they say that it is a fatal flaw to use birth certificate info because birth certificates don't adequately capture intended place of birth. But intended place of birth doesn't matter for this study - actual place of birth is what is most important. And the place of birth is adequately captured. The data used in these studies was only midwife attended births at home or at freestanding birth centers. As I said above, if it was unknown whether or not an attendant was present or if there was no attendant at all, the data was not used. So again, their second “flaw” with the article is yet again, not actually a flaw.

Then they say this "In recent well-designed studies that captured planned place of birth and used better sources of data, there were no differences in 5-minute Apgar scores between home and hospital settings (Hutton et al, 2009; Janssen et al, 2009; van der Kooy et al, 2011)." How incredibly shocking!! Yet again, MANA is trying to prove a point about safety by using studies based in other countries -- the first two studies are out of Canada and the third is out of the Netherlands. How on earth does this apply to the findings of these studies? IT DOESN’T. It literally takes nothing away from the findings of these studies.

Finally they offer this "They analyzed the rare occurrence of 5-minute Apgar scores of zero, which may be indicative of a number of possible events which may or may not have been related to the time, location or care provider at the birth. The authors note that stillbirths may have occurred in the third trimester, may have been due to lethal congenital anomalies, and other possibilities that are captured in a 5-minute Apgar score of zero." However, if you read the study, they address this. And although it is considered a limitation that antepartum deaths may be included, it likely wouldn't change the findings because intended home or birth center antepartum deaths would be transferred to the hospital for delivery. What midwife would keep a woman at home to deliver the baby if she couldn't hear a heartbeat at the beginning of labor?? The chances of any third trimester stillbirths being included in the home birth group are slim to none.

That covers their critique of the studies. They were grasping and officially grabbed onto nothing.

The fact is, these two studies are very high quality. No, not perfect. But the findings should certainly not be dismissed. They should be addressed. And they certainly should be considered for those looking into home birth.

While home birth can be safe, the truly safe scenarios are the exception, not the rule. All evidence points toward an increase risk at home. I have no doubt it is largely due to the lack of training and education of the birth attendants.

I have more to say… including my thoughts on what situations I would call “safe” for home birth and thoughts on the CPM/LM credential… but I will end this particular post here. Stay tuned…

01/14/2013 Update:
I added a blog post addressing guidelines for having a safe home birth. Click here to read it.